When we received the agenda and saw the word of the day as “doozy”, no one knew it was a foretelling of what was in store for our meeting on August 3, 2019.

It all started when we tromped up the stairs of our temporary meeting venue (Check our previous post for the stair count!) and no one could find the key! While some might give up and go home but at Beyond words we take everything in stride .. We promptly marched down to the park across the street and set up our meeting place around the quaint little gazebo of the park. 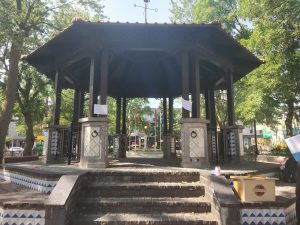 The stage is all set!

Our Chairperson/Toastmaster of the day Frank Vigliotti started the meeting. We had DTM Davender Gupta deliver his Pathways DTM project speech, in which he outlined his plan for the DTM project. Davender aims to roll out a strategic plan which will allow District 61 to grow and sustain more clubs in the future. Davender had to overcome the city of Montreal’s watering trucks and emergency vehicles while delivering his speech. We are sure that he’ll overcome any other challenges that arise just as easily! All the best Davender!

Following the prepared speeches, we had an insane THINK FAST! session, led by the ever enthusiastic DTM Bonnie Mak. While a bunch of people started a calming yoga session behind us, Bonnie had us performing verbal yoga through various improv games. She had us wooshing and whoa-ing and zooming an imaginary ball while also screaming “The barn’s on fire” and running around the gazebo from time to time. Our verbal yoga session was nothing like the actual yoga session happening behind us. We moved on to building stories from random words. We started off with a plan to visit Antartica, then got on to a cruise boat, that had a swimming pool but also had a mouse on board. Not sure what happened, but in the end we discovered it was not a Mouse but a man in a mouse suit. 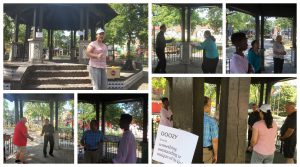 All the madness of THINK FAST!

Then, we kicked it up a notch, acting out a scenario until another member trades places to switch to a completely different scenario. We had some gambling, a relay race, a dance masterclass, some horse racing, jogging, a massage session, a swimming masterclass, a gun duel and more.

If there was one thing that wasn’t a complete doozy, it was the Coaching session, where it was business as usual as our evaluators analyzed Davender’s speech and provided feedback. The Coaching session was was led by TM Francis Rounding, who drove down all the way from Cornwall, Ontario to join us. TM Marna was the content evaluator and DTM Aamir was the evaluator. 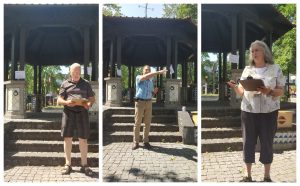 After hearing reports from the advanced Timer, grammarian and General Evaluator, we concluded the meeting with the award of excellece, which was shared between DTM Bonnie Mak and DTM Davender Gupta. Overall, the meeting was a real doozy! 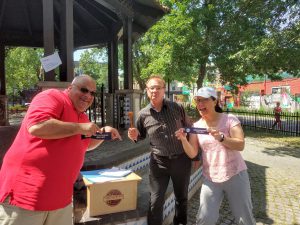 ChairToast Frank presenting the award of excellence to Davender and Bonnie!

This entry was posted in Uncategorized. Bookmark the permalink.